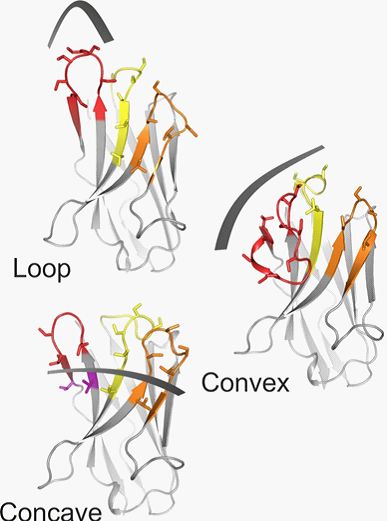 Membrane transporters are difficult to crystallize due to their limited solvent-exposed surface. In addition, the intrinsic flexibility of transporters impedes their analysis by cryo-EM. In vitro selected binding proteins offer the possibility to overcome both shortcomings at the same time: they can stabilize a transporter in a defined conformational state and mediate crystal contacts.

We have established a platform for the selection of synthetic nanobodies called sybodies entirely in vitro (eLife, Zimmermann et al. 2018). To this end, we have constructed three sybody libraries exhibiting different randomized shapes (see picture). The sybody platform is ideally suited to select binders against delicate membrane proteins in the presence of non-covalent ligands. Thereby, sybodies trapping the targeted membrane protein in a defined conformational state are obtained. Our sybody story started as a CTI project in collaboration with Roche, during which we achieved to generate sybodies against two disease-relevant human SLC transporters 2017-05-29_TMoNews_SyBodies_Final.pdf (PDF, 586 KB). In addition, we generated sybodies capturing the ABC transporter TM287/288 in its outward-facing state for crystal structure determination (Nature Communications, Hutter et al. 2019) and generated a sybody that was crucial to solve the structure of the KDEL receptor (Science, Bräuer et al. 2019).

Sybodies are fully accessible for academic research labs. We have sent out the sybody library to around 20 research labs around the globe, and we trained a total of eight researchers from Switzerland/Europe/Asia on sybody selections. To empower other labs to establish the sybody selection platform, we have published a detailed protocol (Zimmermann et. al, Nat Protoc, 2020).

As a fast response to the Corona crisis, we generated sybodies against the SARS-CoV-2 receptor-binding domain and published the sequences in the open domain (https://www.biorxiv.org/content/10.1101/2020.04.16.045419v2).

Our sybody technology is currently applied in two Innosuisse project together with leadXpro and Bühlmann Laboratories as industrial implementation partners.